People can be judgemental and biased at times.

They tend to make their own conclusion / make their own judgement on people or things readily without much verification…
I think I can be guilty of doing that at times but I will still verify on my own before jumping into my own conclusion.
Thinking back, my friend’s agency under Prudential was recruiting Financial Consultants and I helped him to broadcast the message to my fellow friends. Then one of my acquaintance was interested in the offer and I referred her to my friend to liaise among themselves.
That acquaintance has been stucked in a small role of a local bank for years and felt that her career is stagnant as she is not given ample opportunity to shine. Moreover she said that she wanted to make “big bucks” and I advised her to give this job offer a try as the only way to make quick bucks is through sales or frontline jobs. In addition, she was in her late twenties and if she really want to change her ‘fate’, she has to get cracking instantly.
Hence I gave my friend her contact and he liaised with her directly. My friend informed me that he would be arranging an informal interview over dinner with his Director at his condo @ Sentosa Cove. He told me that my friend was beaming with excitement as she exclaimed “WOW” when she heard about having a meet-up at Sentosa Cove.
I thought everything went well till a few days before the supposed meet-up, my acquaintance messaged me to ask if my Prudential friend is trustworthy. I casually replied that he has to be creditable in order to survive in his post as Senior Financial Consultant in the past decade. Moreover, nobody would want to engage in a sleazy Financial Consultant to do their financial planning. Then, I proceeded to ask her why did she ask that question. Then she replied: “Nvm, just asking…” and ended the conversation.

Shortly after, my Prudential friend told me that she cancelled the interview herself and requested me to check with her the underlying reason for her sudden change of mind. He informed me that his Director changed his mind about meeting up at Sentosa Cove as my acquaintance suddenly wanted to bring another guy friend along to understand the job scope. Hence, my friend informed her that he will be meeting up with them without his Director at some other Cafe instead.
Puzzled  that my acquaintance suddenly changed her mind and even wanted to bring another guy friend along to the meet-up, I contacted her to ask her why. She simply replied: “Everything is not right… They are not sincere about recruiting with all the changes in venue etc…”
Hence I just shoot her that it was not courteous to bring a third party along to an informal interview. Plus employment packages are supposed to be confidential and discussed only with the interviewee individually. This is like common sense knowledge, no?
Then she sent me the following screenshot to justify her stand: 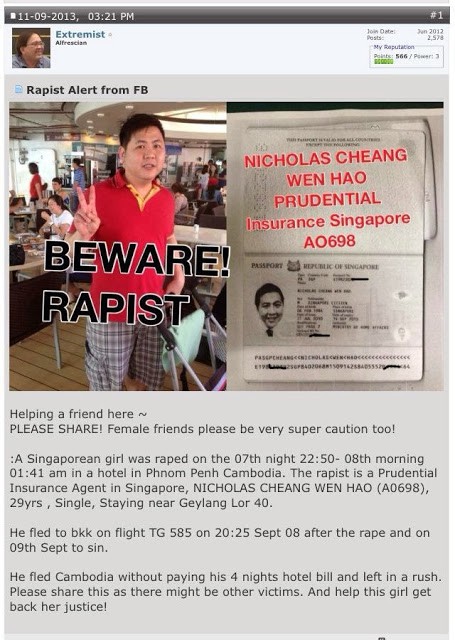 OK, so this was the alert that went viral on Facebook – Nicholas Cheang Wen Hao allegedly raped a Singaporean girl and he was a Prudential Insurance Agent in Singapore.
So??? Does it mean that all rapists are financial consultants from Prudential?! If that is so, shouldn’t all Indians be labelled as rapists as the rape cases in India were atrociously high too?!
C’mmon, just be objective – What can a poor guy do to you in Sentosa Cove? He did not even schedule the meet-up in some hotel room of Hotel 81 or something… If she is so concerned about being raped, she should have suggested to have the meet-up elsewhere (i.e. in the Prudential building, in the heart of Orchard Road or somewhere with a lot of people) and not just conclude that my friend is “not right” and “not sincere” about the job offer. Including her guy friend into picture can only ruin everything — showing how she disregarded the importance of the interview and her inability to think independently.
Our primary objective was just to help her with her career but it seemed that she interpreted it as a rape attempt. This is just so superficial and insulting to us. When in doubt, please try to get clarifications instead of just jumping into conclusions directly.
Anyway, now we know why is she forever stagnant in her job — it was her warped thinking which is stopping her from succeeding. Plus she is never ready to leave her comfort zone to take up new challenges ahead. Well, this is what we term as having a BIG shit in her brain… 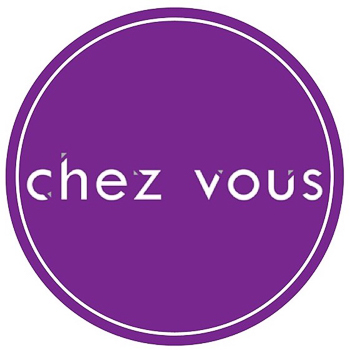